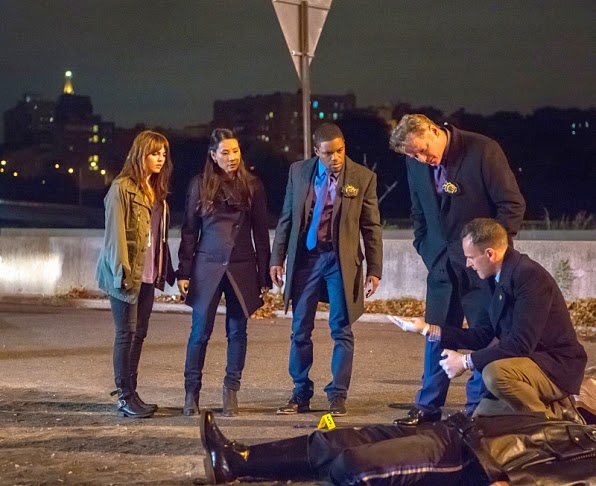 Holiday activities made it impossible for me to catch this episode till last night, but I finally did.
The last couple of episodes I have been watching on the CBS app for IPAD and I have really been enjoying that method.
But I digress.

This episode opens with police lights flashing and pans out to a dead police officer laying on the ground.

It then cuts to Holmes attending his support group meeting and offering, for us Sherlockians, a really good Sherlockian quote; "My mind rebels at stagnation. . . .".
Rather well delivered by Miller and a good explanation to his group of one of the reasons he has trouble staying sober or clean. It turns out however that someone has been using his comments at these meetings and posting them on a web site to help other addicts. This he finds intrusive. The web site is of course named after his own phrase 'Brain Attic'.
Needless to say, Holmes is not happy.

While leaving the meeting Holmes gets paged by Gregson to come to the scene of the police shooting.

Quick recap; An officer is found dead. With the help of Joan it is determined that cop had been a drug addict and that his death was a result of that time in his life and his need to sell police guns to pay for his habit. He was found with a fake gun in his holster which leads to the discovery of missing guns at the police armory.
Another officer is murdered and Holmes determines it is a murder needed to cover up a robbery being planned for the same time as the officers funeral.

I thought this was probably the best episode of the season and one of the better ones of the whole show.
I think this was Millers most Holmes-like portrayal yet, and made him out to be very human without the stupid little quirks the show has become known for.
The case, although flawed in a couple of places was still very good and held my attention.
Although having key observations throughout the episode, both Joan and Kitty had more comfortable secondary roles.
The whole episode was really about addiction, whether it was Holmes or societies. And it made some very good points how addictions can destroy just about everything one holds dear.
The story examined how close Holmes will always be to his old habit and how he is always at a balancing point to maintain his equilibrium.
The wonderful quote found near the beginning of the episode, from SIGN, reminds us, Canonically, how close Holmes always was to this skeleton.
The fact that these addictions can also effect careers and families was also made clear in this episode.

The Holmes represented in this episode was a flawed yet likable Holmes, who has his skills and habits that confound most of us, yet make him who he is. There was no absurd. We saw a Holmes who reacts in ways we don't always understand yet is balanced out be the results. (most of the time)
I liked the fact that Millers Holmes, near the end, wrestled with his decision in making his fellow addict remove his quotes from the web site. Once again he was taken out of his comfort zone and was forced to examine whether or not his needs came first or the needs of others.

Millers Holmes was irritable and impatient. But not so much so that the slight Canonical shadow of Holmes was unnoticeable . I think this was a Holmes that even maybe Brad could come to like.

This episode made me hope that maybe the writers have found their stride and are now building a better modern Holmes.

We saw a Holmes who was not above self incrimination for mistakes he thought he had made.

He showed weakness in his fear of not being able to control his habit.

There was no childish bickering between the principles.

I enjoyed this episode very much and can easily give it;

Canonical things to think about.

Did Holmes find Watson's writings, especially in the beginning, to be not only intrusive but a detriment to his career? We find in several cases, (SCAN for one) where Holmes reputation proceeded him. And we also have the quote, "Holmes the busy-body . . . ".
Did Holmes later enjoy the reputation the writings gave him and the invasion on his privacy, or would he have preferred to remain, publicly unknown?
Was the Canonical Holmes as uncomfortable out of his comfort zone as 'Elementary's' is?