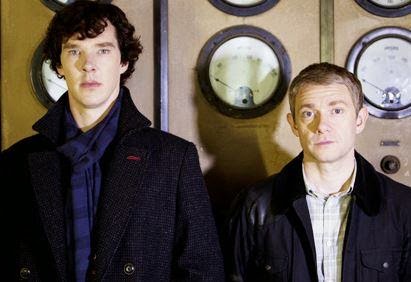 "Sherlock" season four release date has been confirmed, well kinda. BBC confirms that the hit series will arrive in 2016, which means an entire year without "Sherlock." Fans of course are pissed and blaming star Benedict Cumberbatch as he tries to juggle filming the series are launching a career across the pond in Hollywood.
"Sherlock" season four will reportedly have three episodes and an additional one-off episode. The special one-off episode is going to be the highly anticipated Christmas episode which will most likely air in 2015. With fans having to wait an entire year for "Sherlock" to return there have been much speculation on what fans can expect in the new season.
One of the most interesting rumors is that Watson's love Mary Morstan will die. According to FashionNStyle, the new season may have Morstan, the wife and mother of Dr. Watson's child, dying. While we don't believe Mary will die anything is possible. This would also fall in line with the news that season four will be "devastating." In an interview with Entertainment Weekly co-creator Steven Moffat was asked if season four can top the previous and he replied something ominous.
“We have a plan to top it. And I do think our plan is devastating. We’ve practically reduced our cast to tears telling them the plan … we’re probably more excited that we’ve ever been about Sherlock.”
1. Irene Adler may return! - iDigital Times reports that Irene (Lara Pulver) may return to "Sherlock" for season four. If you don't remember Irene she was a love interest to Sherlock and much more than that during the early season. Pulver spoke of returning with RadioTimes saying:
"Sherlock is Mark Gatiss and Steven Moffat’s passion project. If it fits to have her back, I know they’ll write it; if it doesn’t, I trust them to get it right."
Adler was a dynamic character and her return would be very interesting no matter what the plot is for the fourth season.
2. Janine Returns! - Another love interest of Sherlock's and Mary's close friend, Janine will return for the upcoming season. According to Moffat she will definitely be back and her and Sherlock will be friends. The writer told IGN:
"He likes her, though. He'll see her again. They'll be pals. I loved Yasmine's performance as Janine -- she still likes him in the end. At some point, you know, if Sherlock Holmes has to go to a function and he needs a date, he'll phone her up. Now, he'll not expect her to say no. She'll be very cross with him, but she'll show up, and they'll have a good time. They will, because he likes her."
3. Moriarty is not Alive! Moffat said early on that Moriarty is indeed dead and not coming back. The writer said "He shot himself in the face. What more do you want?" However, if you are suspicious like we are then you could say that this is a ploy to keep the surprise alive.
4. Tom Hiddleston may join the cast - The "Avengers" villain is said to be joining the cast of "Sherlock" for season four. Online speculations have said that he will join as the third Holmes brother. In a Q&A in Brazil, Mark Gatiss, who also plays Mycroft Holmes in the series, joked about the idea when asked if Hiddleston would be considered for the role.
5. Future seasons are already planned! Moffat told the Guardian that He and Mark already planned ahead for more seasons saying, "Rather excitingly, Mark and I, for no particular reason, we just got out of the rain and sat at the top of the [Sherlock] production bus … and we just started plotting out what we could do in the future." He also added that there was no plan for a movie as each episode is a feature length itself.
Posted by JohnF at 9:30 AM